This technology which was being used in Apple iPhones has features to identify gestures and forces. Along with this, the 3d touch tends to offer accurate feedback.

In this article, you are going to read about 3d touch, it’s uses, features, replacement, how it is different from haptic touch, etc.

What is 3d touch?

The technology 3d touch is a hardware-based feature integrated into the iPhone 6s, and it’s plus versions of devices. Indicates the magnitude of force a user applies on the touchpad of the device to use various functions.

How to use 3d touch?

As you know what 3d touch is in the above paragraph, you can use it easily. With the 3d touch in apple devices, you can work on your device without navigating far from the screen that you were using. When you swipe or push on the screen with additional pressure, you can access certain applications, other content, or preview emails on the home screen. In addition to that, you can apply multitasking mode in the device by pressing the screen of the screen that will allow you to swipe between any opened app that you need to use. 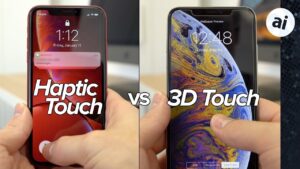 • Fast access to applications on the home screen of iPhone

One of the best features of the 3d touch is, it allows quick access to actions to many apps on the home screen of the device. However, all the apps are not compatible with this technology.

When you press and hold Facebook, you will get to search, write a post, publish a video or images, etc. Few apps give more flexible options, including a pop-up menu, add widgets, etc.

These two are also important features of 3d touch iPhone devices. Talking about peek, while using it, you can swipe up from the bottom screen to open the menu bar with specific functions of certain apps. For example, after peek, you can get an option to copy the URL or open a new tab for the website. While the pop function enables you to bring a full-screen preview of your requested content within the application, to get that, you will need to apply additional pressure on the screen.

In addition to the above features, there are some more features of 3d touch iPhone devices, Like a keyboard turning into a touchpad. You can also get the facility to draw lines of different thicknesses in pressure-sensitive drawing with 3d touch.

In this technology, capacitive sensors are attached to the backlight of the retina display of the iPhone devices. Depending on the amount of pressure, microscopic variations in backlight and cover glass are calculated and then combined with the touch sensor. This data is then provided to an accelerometer that tends to give the correct response.

This technology is integrated into devices that are compatible to detect touch pressure changes. The following devices are among them to use 3d touch.

However, some devices are not compatible with 3d touch.

As we have seen, a few devices are not compatible with 3d touch, including that of iPad. So Apple launched a new technology called haptic touch. This haptic touch is better than in the case of features. It supports getting additional contextual data like quick action.

Haptic touch is not a fringe feature like 3d touch. Due to these multiple reasons, Apple came to a conclusion to replace 3d touch with haptic touch in their devices.

Moving ahead, Apple launched haptic touch way back in 2018 in iPhone XR. After that, they worked on expanding the use of haptic touch in all iPhone devices.

This latest touch feature uses a taptic engine to provide haptic feedback once the screen is pressed on the latest iPhones of Apple. It is also a touch and holds features like 3d touch.

3d touch helps you to access a lot of pressure, so you could have a different output for different amounts of pressure you apply. This gesture was available in peek and Pop features.