If you are a person who loves to play games but has to travel a lot then you are at the right place. It has been said for years now that PCs or a Desktop are the best options for gaming purposes. Now it is time to keep that thinking away and bring a variation in thinking and acknowledge the limitations of PCs and Desktops. For a person who travels very much but loves to play games then PCs and Desktops are not at all a good choice. Laptops are the best option for such people and not just any laptop but a high configuration Alienware 17 gaming laptop.

By a high configuration gaming laptop, we mean the laptops which were made with the sole purpose of playing games smoothly and improving the experience of gaming on a laptop. Good display, amazing graphics, amazing speaker, incredibly fast processor, and many more things are needed to experience the best put of a game. We are here to show you which laptop is the one you can choose to get all of these things. Alienware 17in Laptop is one such device that a person who is into gaming can choose for a good experience.

What is Alienware 17 inch Laptop?

The laptop that we call Alienware gaming laptop is one of the best laptops made with the sole purpose of playing games. The device was first manufactured and released in the market at the end of the year of 2013. So it has already been 8 years since the device was first introduced in the market and still, it has held its head high as one of the most appealing and preferable gaming laptops.

The size of the screen of the laptop made for gaming is a little more than 17 inches, which to be exact is 17.3 inches in size. It is an upgraded version of the gaming laptop which was named Alienware M17x. In some countries around the world, it is known by a different name. The other name with which many countries identify this previous version of  Alienware 17in Laptop is called Alienware M17x R5 Ranger.

The History of the Alienware 17in Laptop

There have been many versions that were introduced in the market of Alienware 17 gaming Laptop. With each new version arriving the other versions becomes obsolete and the versions are manufactured at a very low rate and most of the manufacturing investment is put on the newer versions. 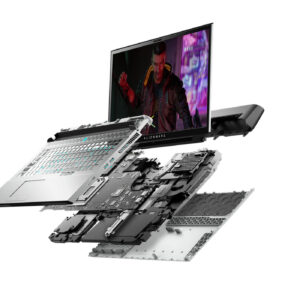 All the versions of Alienware 17 gaming Laptop introduced in the market till today are as follows:

The first update in this version was that it was set with Intel Haswell processors which were considered to be the fastest and the most efficient in the year 2013. Nvidia GeForce 700 series GPUs are set in the laptop and also the new body design and facelift of the AMD R9 M290X were set in this first version of the Alienware 17 gaming laptop. Four RAM slots are provided in the device in which a person can insert 8 GB of RAM in each of the slots, basically a total of 32 GB of RAM can be accessed. Screen resolution can be controlled from 1600×900 and to a maximum of 1920x1080p.

The second version of the Alienware 17 gaming laptop was introduced in the market in the year of 2015. The GPUs which were Nvidia GeForce 700 in the first version was updated and the better version that is the Nvidia GeForce 900 was set on the laptop. The laptop also featured the matte FHD display and you can also have the FHD touch screen in the device. A port was provided on the rear of the graphic amplifier. In this second version a BGA mounted GPU and CPU were introduced. This was a limitation as the user cannot change the CPU or the GPU without changing the whole motherboard of the device.

This is the third device introduced in this series of gaming laptops with additions and updates. Windows 10 was made available on the Laptop. This time two slots of RAM were made available with a configuration of 16 GB each hence the total RAM of the laptop can be 32 GB. A display with FHD Overclocking is made available.

This version of the series was introduced at the end of the year of 2016. Tobii eye-tracking is available on the laptop. Nvidia GeForce 1000 series was fit in the laptop. Other than these all the other features were kept the same.

After reading the in-depth description of the Alienware 17 gaming laptop you must know why it is considered to be one of the best gaming laptops.