The last time racing and open-world had been put together in a game, players received Need for Speed Underground, one of the greatest racing games of all time. It paved the way for many other racing games to emulate its formula. Developer MadOut Games thought of trying to emulate that, and for its efforts, they came out with MadOut2 BigCityOnline, a game where you race cars and end up becoming one of the most successful racers on the city streets.

At first glance, the game probably looks like it’s a copy of GTA, but it’s supposed to be a racing game, first and foremost. Games.lol also leads the way in providing an easy and free way of playing this game on PC, which – arguably – is the best console to play racing games on. During your free roam, you’ll come across a lot of events, meet many people, and will also have to escape the law as – on more than one occasion – you’ll find yourself breaking the law. Let’s not dilly-dally for long and let’s take a look at how to play the game.

All The Cars You Can Find

There are a lot of cars in this game, most of them European in make. You can also unlock various bonuses so you need to tailor your play to open them. These are rockets, mines, and bullets – pretty much aids if you want to strengthen your reign of terror in the game. MadOut 2 BigCity Online also gives you a way to earn these cars – through coins, which you have to play for, of course. There are different cars for every job, and you have to earn these cars to get around the world of Big City. 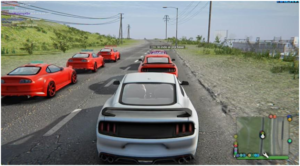 There are about 30 types of cars in the game. You’ll also cycle between different racing events – up to 60 races are spread throughout the city. You’ll have plenty of time to train as you zip through the city streets and turn yourself into the best racer in the city. In between, you’ll also gain access to different items to aid you in your travels. These items will help you make your car faster, become a more lethal killer, and also turn you into the best racer that the city’s seen in a long time.

The world of MadOut 2 Big City Online is huge – it’s why the game is called such in the first place. You will start exploring this world and get through different racing events, available through the city. You’ll also get to explore not just one city but also different parts of the world.

The world of Big City appears to operate in the real world and not a fictional one. Places like Russia will open up to you eventually once you get better enough to leave your starter city. This also explains why you’ll be getting all of those nice European cars – that is, if you’re skilled and lucky enough. Russia and other places just start in this huge open-world game.

If you’re not a fan of the single-player genre, get your friends to join you. The game also features an online mode where you can organize a meet-up when they’re online. The developers had made sure that it would be easy to meet-up with players here – all you need is a strong connection to latch on and you’re all set.

Where Games.lol Comes In

Sure, all the gameplay sounds nice, but you have to make sure you have an excellent website to download the game from. That’s where Games.lol comes in. The game aggregator site provides MadOut 2 BigCity Online for free, as well as other games of other genres – racing, action games, adventure games, and even open-world RPGs, are free to download from the website and to your PC.

All you have to do is to go to the website and click on the ‘Play Now’ button. It will automatically provide you with an installer for the client. Once you have the game client, you can search for MadOut 2 BigCity Online, and get started exploring the open-world racing/action game.

Get All The Speed You Need

If you want to play and move at breakneck speeds, look no further than MadOut 2 BigCity Online. It’s got something of everything – the big cars, fast action, tricky enemies, and a whole lot of road to explore in the open world. Get together with your friends or play with your lonesome – the choice is yours. Make sure to collect all the cars and get all the weapons to get a fighting chance. It’s the most that you can do in a game like this.